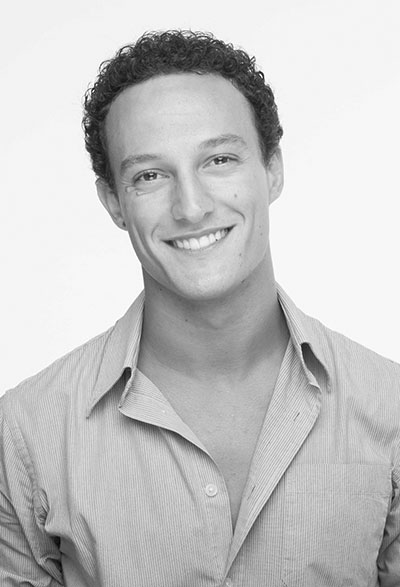 Jacopo Bruno graduated in musical theater at the BSMT - Bernstein School of Musical Theatre in Bologna in 2011 under the direction of Shawna Farrell. In the three-year course has the first option of starring roles in several shows including: "Urinetown," "A Little Night Music," "Kiss of the Spider Woman" (Kiss of the Spider Woman), "Rent" (the latter directed by Francesca Taverni). numerous professional experiences in theater, both in comedian operas and musicals. He works for Corrado Abbati as an actor / comedian operas; among the shows: "The Land Of Bells", "Die Fledermaus", "The Merry Widow", "Can Can", "Guys and Dolls" (Guys & Dolls). He then worked with Simone Sibillano in its "America - The Musical" and must recently project "The Sisters Frank". He is currently on tour throughout Italy and abroad together with The Sisters Marinetti and Gianni Fantoni with: "Laughter Under the Bombs" and "The Family Canterina" (concert).